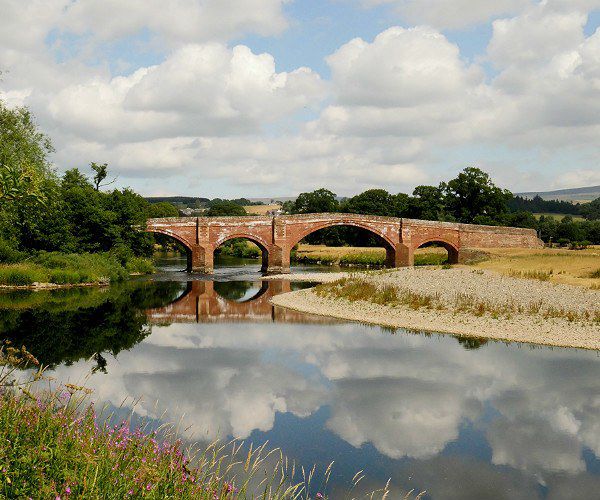 Our latest trip was to the Eden Valley on the eastern side of Cumbria. Whilst many visitors to the county head for the Lake District, areas that are peripheral to the UK’s newest UNESCO World Heritage Site are often overlooked. Those who venture further afield than the confines of the National Park are rewarded with some hidden gems away from the tourist crowds.

We stayed in a lovely self-catering property in the sleepy village of Cumrew, just 7 miles from Brampton, available through Sally’s Cottages. The Hayloft lies in the grounds of Cumrew House, a Grade II Georgian manor house that sits against a backdrop of Cardunneth Pike, home to a managed grouse moor and part of the North Pennines, designated as an Area of Outstanding Natural Beauty (AONB).

Most of the accommodation (other than a ground floor porch and utility room) is on the first floor. Here there is long, open plan kitchen, dining and living space, with the bedrooms beyond, all with lovely, long beams giving the space lots of character.

Although we chose to eat out mostly, the kitchen is fully equipped with all the usual modcons so there are ample facilities and utensils to rustle up your own dishes should you choose.

There was a lovely welcome tray to greet us, complete with freshly-baked scones.

At the other end of the room is a lounge in which to relax, complete with woodburner (surplus to our requirements during a record-breaking Summer, but no doubt very cosy for Winter breaks).

On one side, The Hayloft looks out over the entrance to the property and, on the other, an enclosed lawned area.

There’s also a walled garden within the grounds where you can wander and stretch your legs.

A corridor beyond the main living space takes you to two en suite bedrooms – one twin and, at the far end, a large double.

WiFi works well throughout the property, although is a little weaker by the time you reach the double bedroom at the far end (that’s not a bad thing!!). Whilst this airy property sleeps four people, there is a further double en suite retreat for an additional two people available across the courtyard if required.

The Hayloft is also dog friendly so it was nice to be able to take our Springer spaniel, George, with us. You are just politely asked that they are not allowed into the bedrooms which is perfectly understandable.

Outside there is a tennis court – an unexpected extra – and rackets and balls are kindly provided.

It would have been easy to have spent all our time just relaxing at the property, but we do like to get out and about, exploring the local area. One of our first visits was to Little Salkeld Watermill, specialist millers and producers of organic and biodynamic flours. As well as the mill, there is a lovely little tearoom famous for its delicious baking, using organic and local ingredients, plus a small shop.

From here you can do a circular walk of around 4 or 5 miles, taking in Lacy’s Caves, the River Eden and Long Meg and Her Daughters. The former lie just to the north of Little Salkeld and consist of five chambers carved in the 18th Century out of the red standstone cliffs that lie alongside the River Eden.

Nobody is quite sure why they were made but they were commissioned by Lieutenant-Colonel Samuel Lacy of Salkeld Hall and apparently he used them for entertaining guests.

The walk is worth it for the views alone but there are several points of interest also.

One of these is the Long Meg Stone Circle – also referred to as Long Meg and Her Daughters – which Lacy is said to have once tried to blow up so that the field could be ploughed.

Luckily for us today his men were thwarted by a thunderstorm who saw the storm as some kind of omen, and the plan was abandoned. The circle originally consisted of 70 stones, but today only 59 remain (of which only 27 are standing). Count them at your peril, however, as legend has it that the stones are a petrified coven of witches – if you count them and get the same number twice, they’ll come back to life!

Long Meg is the largest of the stones and lies just outside the main circle, standing at 12 feet and weighing in at 9 tons.

On another day, we visited Hadrian’s Wall Country. Lanercost Priory stands close to the wall and is well worth a visit. Managed by English Heritage, it was founded in the 12th Century but, due to its geographic position, suffered frequent attacks during the long Anglo-Scottish wars, including once by Robert the Bruce himself.

As well as being able to visit the Priory and its grounds, there is a Hadrian’s Wall Visitor Information Centre on site, and a tearooms (including a dog friendly section called Bark & Brew).

We also ventured over the border into Northumberland and to Walltown Crags, where Hadrian’s Wall takes advantage of the natural landscape for extra fortification.

It’s arguably one of the best places to really take in the wall as you get to see it snaking along for quite some time, all set within a dramatic landscape. This area has also been designated a Dark Sky Discovery Site.

Although we mostly ate out (there are plenty of country pubs within a short drive of The Hayloft), one evening we called at the Cranston’s Food Factory in Brampton and bought an ‘easy meal’ that we could cook back at the property. With its moot hall at its centre, Brampton is a small market town to the east of Carlisle, granted its Market Charter in 1252 by King Henry III.

Another place of interest, and really close to Cumrew and Brampton, is Talkin Tarn. It’s a 165 acre site with a glacial tarn at its centre.

A short walk on a well-marked path takes you around the tarn, which is fed by underground streams, and among ancient woodlands.

There is also the Boathouse Tearoom on site and a hive of other activity at the site in the form of outdoor theatre performances, model boat clubs and opportunities to sail, windsurf or canoe.

Most of our activities involved us being outdoors, partly because the weather was so glorious but also because we had our dog with us. We found a great little walk at Miltonrigg Woods – cool and shady, so ideal in the circumstances, with clearly-marked paths and one or two signs telling you about the woodland. I was particularly interested to read about the wood’s association with York Minster. As a child, I remember going on a school trip to York Minster and staying at a friend’s house that night. Imagine our surprise the next morning when my friend’s Mum woke us both up to tell us that the very place we had just visited the day before had been tragically struck by lightning overnight and a fire had broken out. This was back in July of 1984 and apparently the oaks at Miltonrigg Woods were key to the subsequent re-build of York Minster’s roof.

On our final day we returned home via Eamont Bridge, home to a Neolithic earthwork henge dating from about 2,000 BC. It was much later thought to be King Arthur’s jousting arena and became known as King Arthur’s Round Table. It is one of a pair of henges in Eamont Bridge, along with nearby Mayburgh Henge.

We also called at Lowther Castle and Gardens – an area covering some 130 acres. This family seat of the Earls of Lonsdale is home to castle ruins, gardens, woodlands and various other gems. The current castle is the third residence at this location and was built at the turn of the 19th century but abandoned in the 1950s. An informal partnership between the Northwest Development Agency, English Heritage, Cumbria Vision and the Royal Horticultural Society started just over a decade ago has since sought to regenerate the site.

We had a look at the exhibition – which at the time of our visit fortuitously included an oil painting of Lowther by William Turner – before exploring the grounds. The grounds at Lowther are extensive with plenty to see and do for young and old alike. There’s a fun adventure playground for the children, and a great view to be enjoyed by the adults from the western terrace nearby (hey, the kids might even enjoy it, too, if you can peel them away from the playground!).

There are also numerous Summer houses dotted about and, if you’re lucky, you might see the occasional red squirrel (we did). Another highlight is the garden within the castle ruins, pictured below. Lowther is well worth a visit if you find yourself in the area, or indeed if you just happen to be passing on the M6 motorway and need to break up your journey and stretch your legs. It’s dog friendly, too.

Our final stop was at Haweswater as we were interested to see how much of Mardale was showing after a prolonged period of hot weather.

Mardale Green is a village that was intentionally flooded back in the 1930s to make a reservoir.

When the reservoir dries up, parts of the village begin to emerge from their watery grave. Look at the photograph below and you can see some parallel wall markings (a road perhaps?) beneath the water on the right hand side that are still yet to emerge.

Some buildings are identifiable and, if the water drops sufficiently, Chapel Bridge may emerge also.

As you can see, there are so many points of interest in the area, and we have only touched on a few of them here. Whether it’s quiet relaxation you crave, or you prefer to be ‘up and about’ exploring, The Hayloft certainly offers a great base from which to enjoy both, but without being deluged by the tourist crowds of the central Lakes.

Another Boeing 787 Dreamliner Has a Battery Problem

And the Winner of Sound of Music Live Is…